Fort La Cloche, the back of the postcard says "1920. In the canoe Lil Campbell and her friend "The Banker"  - H. Cummings postcard 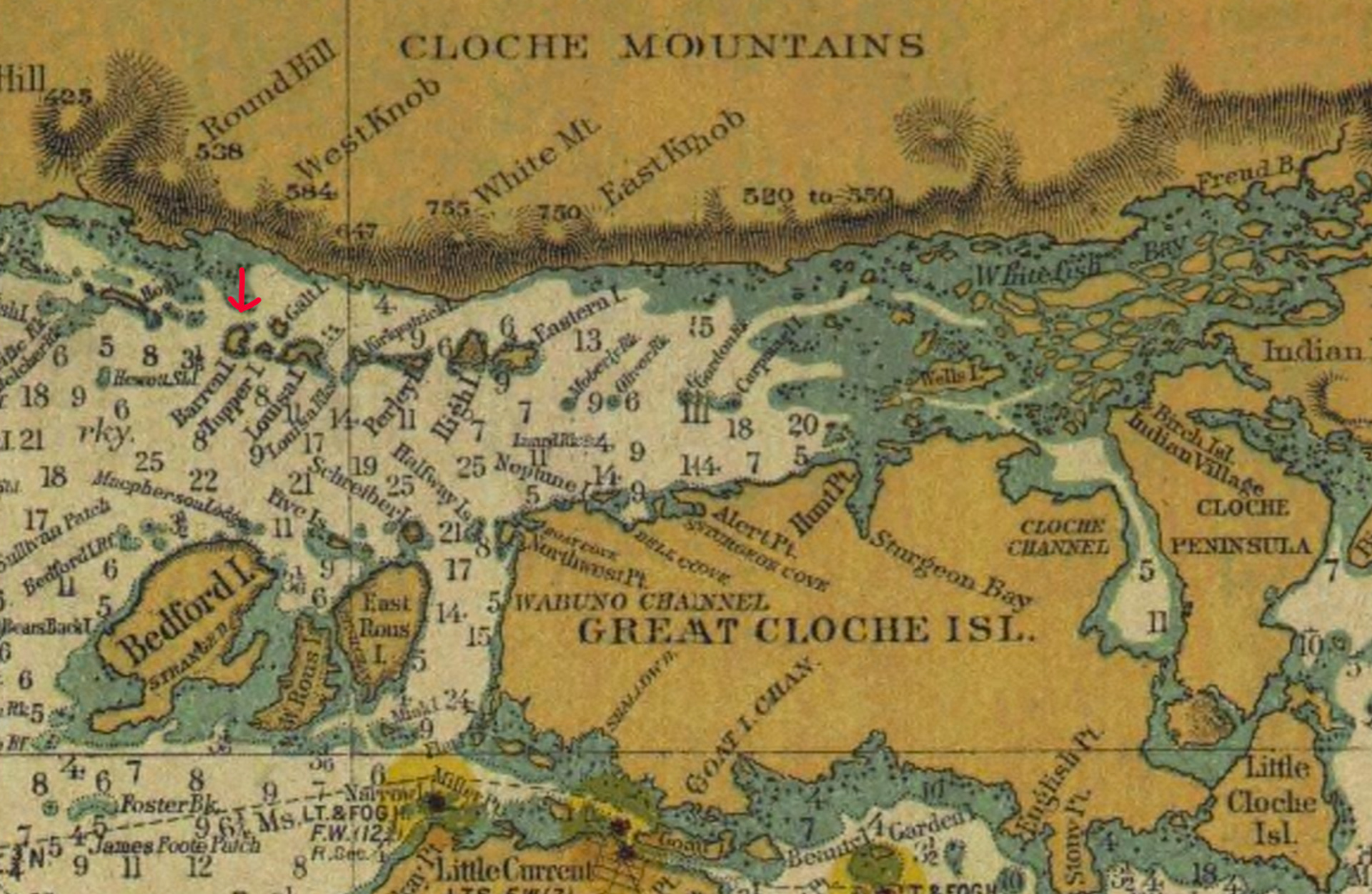 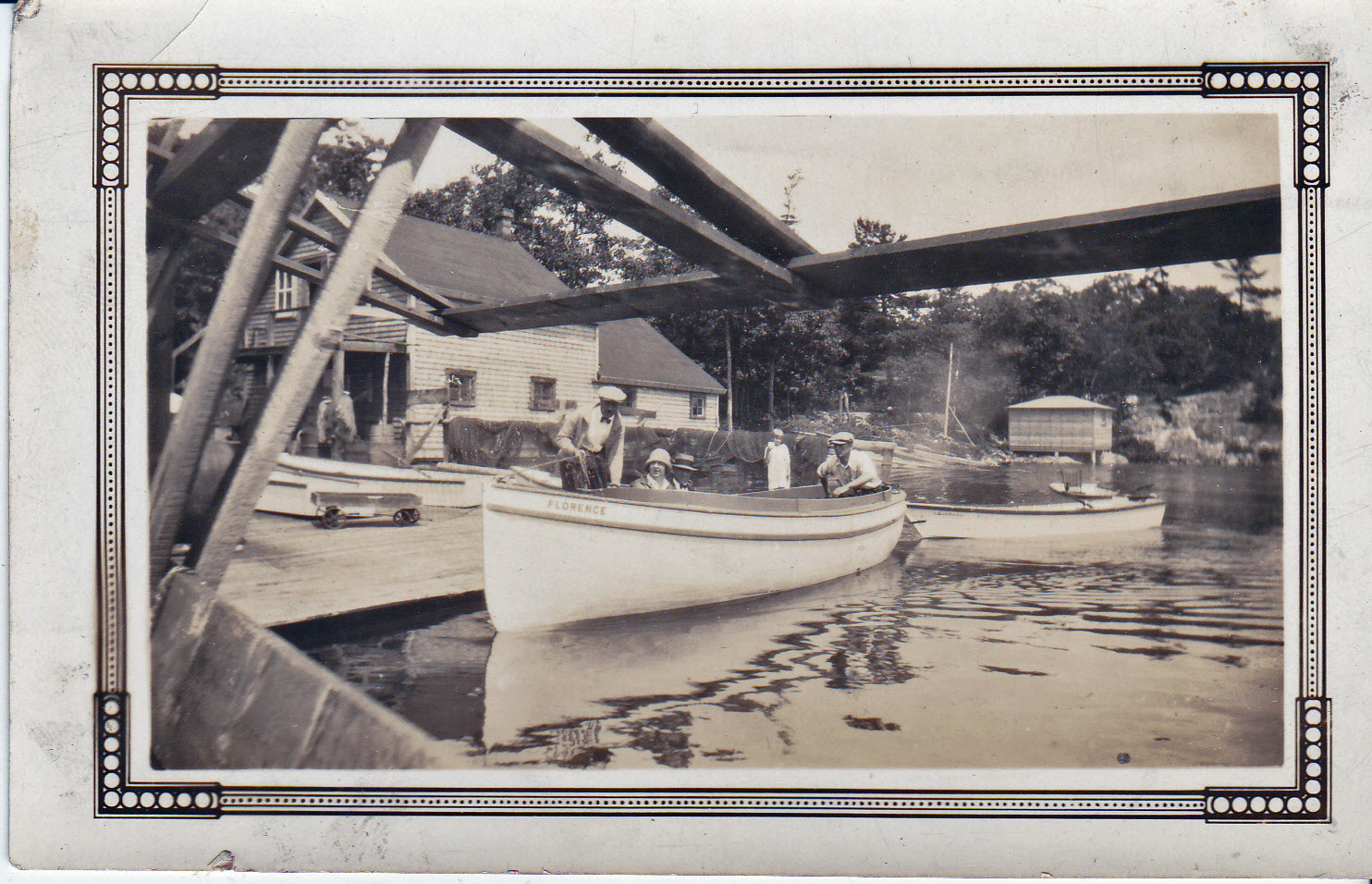 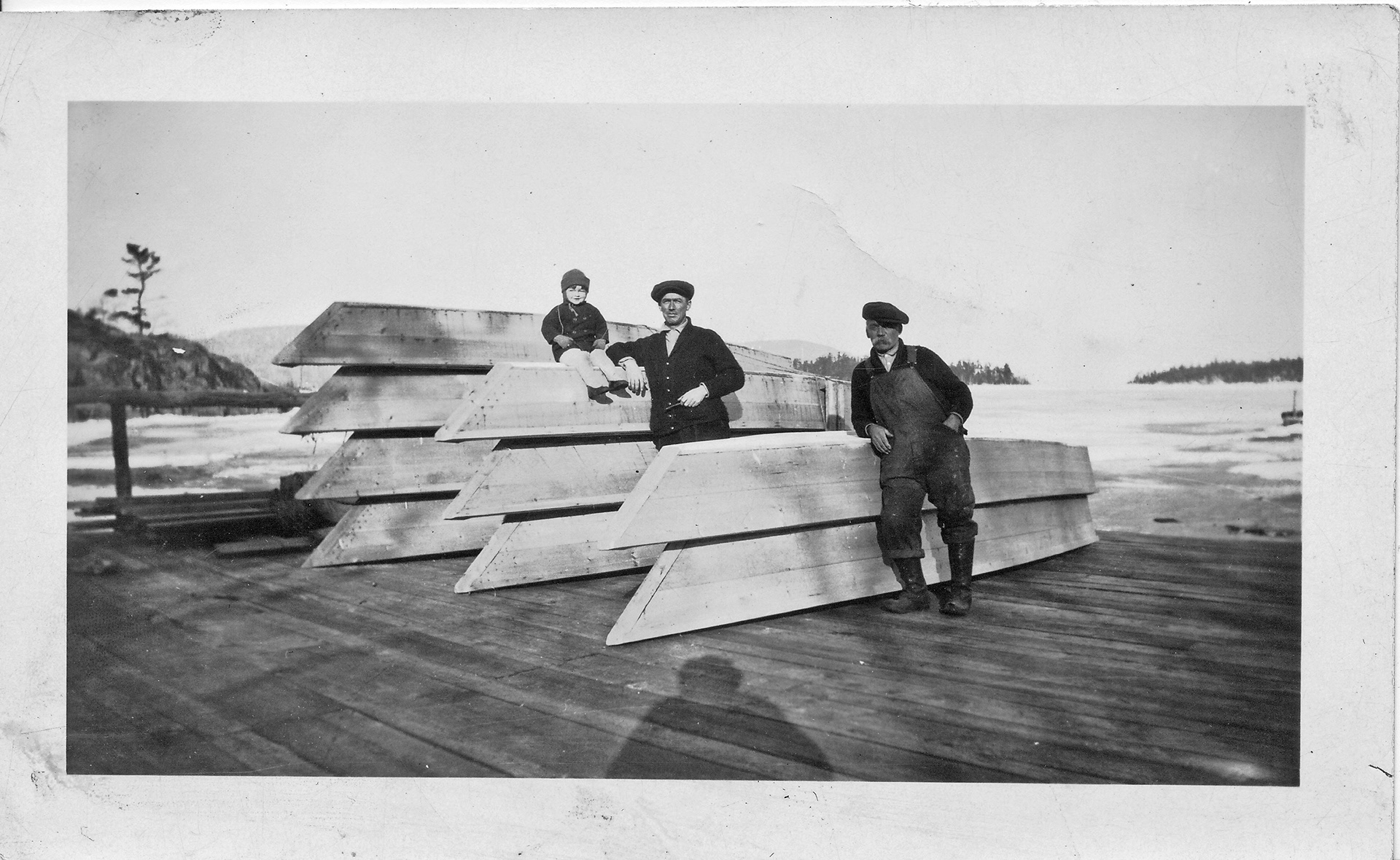 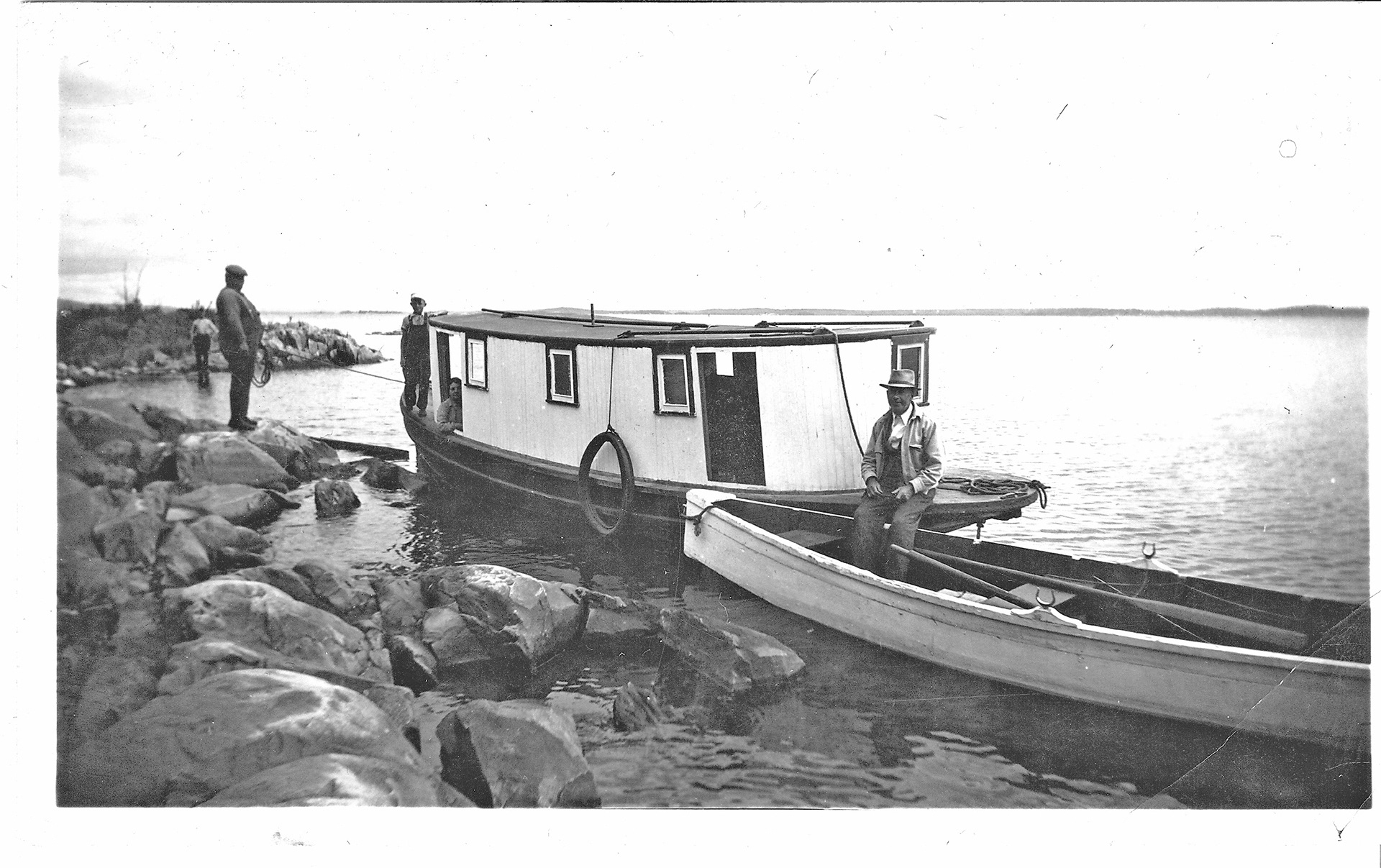 First reported occurrence of nickel in Canada. Was opened as a copper mine in 1847 but closed in 1848. There is a shaft and trench on the property. 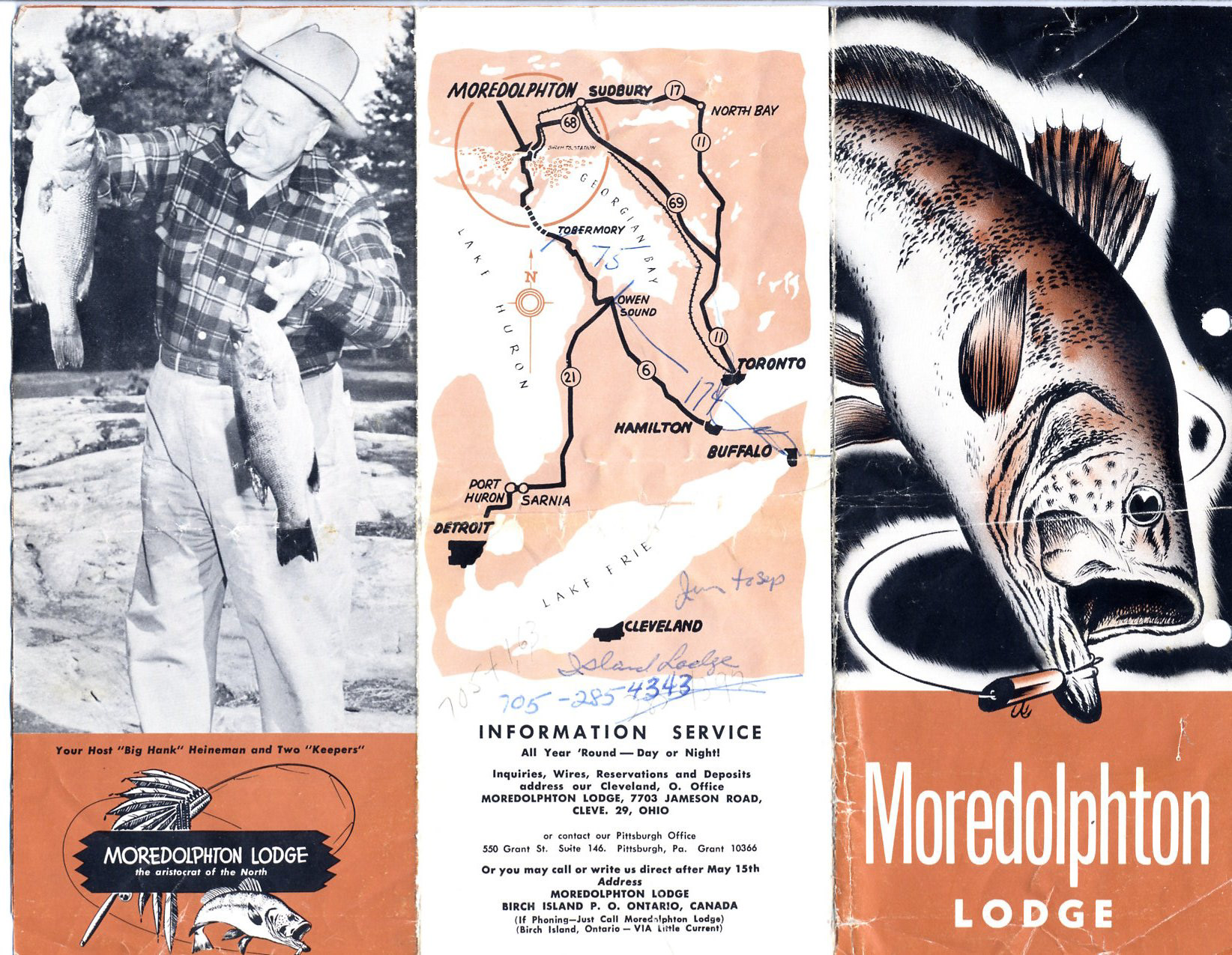 Moredolphton Lodge in the Bay of Islands. Moredolphton Lodge, which became Island Lodge, was a private lodge located in the Bay of Islands. Richard Englert worked there the summer of 1947 and has many fond memories of the blueberry pies, fishing and helping out in the kitchen. "That was a fun summer from first week of June to end of August. I applied for the job as porter and handyman in Jan 1947 and got Tony Vilsack (grandfather founded Iron City Beer) to go up to the Club and work... Two profs from Pitt drove us up and we had a great experience....The kids would not do it today we got free room and board but NO PAY,,, Eat with the Indians and other help in the kitchen... I got to know the baker and she would make me blueberry pies with the blueberries I would pick on the island. We had pies and fish all the time....and I cleaned the fish....so watch out. Yum Yummmmm" - Richard Englert 2004 If you have photos, stories or a history of Moredolphton Lodge please send them to lacloche(at)gmail.com. From Bill Bucher..... "I went to Moredolphton Lodge many times in the 50's and 60's with my parents. The first year we went was probably 1954, when I was 8 years old. The last time I went I was in college, and did not miss a year in between. Most of the time we went with a fairly large group from Indianapolis. Among them were my family, the Buchers, and the Dirks, Walkers, Withrows, Masons, and several others I can't recall at the moment. We would ride from Birch Island to the lodge on a barge towed by a boat. There would be a cooler of beer on the barge. We fished out of Peterborough wooden boats. My dad always took his 10hp Johnson outboard. We had the slowest boat in the group, having the smallest motor, as the others used rented motors of 15hp or brought their own, larger motors. We had a guide several years called "Poddie"; I think his last name was Podwin. There was an Indian guide named Steamboat because he smoked so much in the boat it looked like a steamboat. The lodge at that time was owned by Hank and Marie Heinemann, and their son was around some years, too. They came to Indianapolis for the sports and fishing show each year, and would have a private reception for the Indianapolis gang at the Indianapolis Athletic Club. They would show movies from the previous year and Hank served a drink called Muskeg. I still have and wear a Viyella shirt I got in the little shop in the lodge in 1963. A major undertaking, especially for us in our slow boat, was going all the way to Fort LaCloche. I can still see the other boats slowly pulling away from us and eventually disappearing in the distance. We had shore lunches every day. I have some 8mm movies of a shore lunch taken by my dad in 1956. I know it was 1956 because he doubled exposed it over his film of the 1956 Indianapolis 500. It is quite a site seeing an Indy roadster roaring through a fire and taking the checkered flag with a skillet of fish and a pot of beans cooking away. There was an ice house behind the lodge filled with ice blocks sawed from the lake and packed in sawdust. Next to it was a wooden "cooler" where you could keep your fish on ice. The cabins were rather spartan, but had wood stoves and hudson bay blankets to keep us warm. Some evenings we would walk across a wooden bridge to sunset rock on the other island and have cocktail parties and sometimes we ate over there. Each morning and in the evening the staff would ring a big dinner bell to wake us up and call us to breakfast or dinner." Bill Bucher Park City, KY 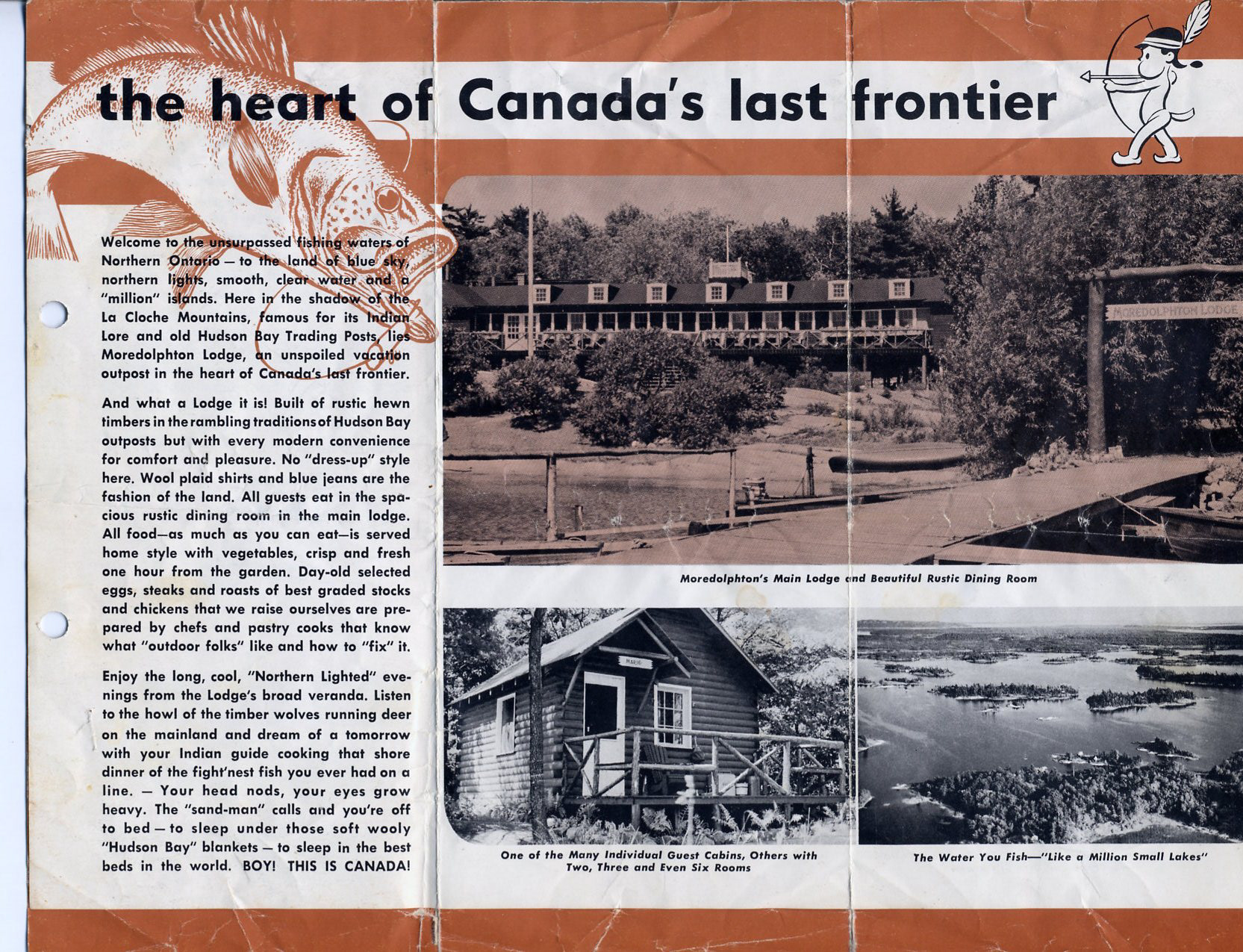 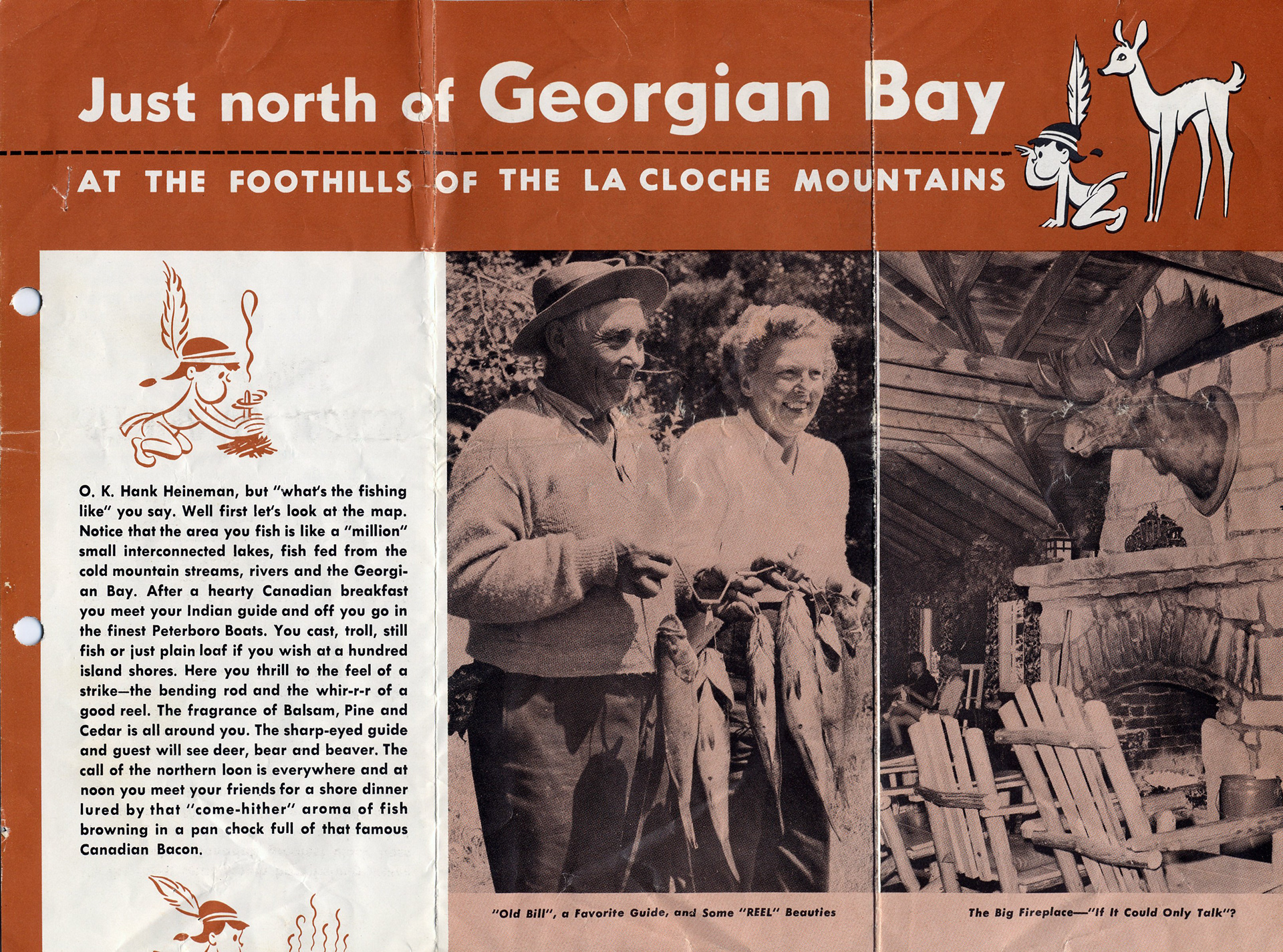 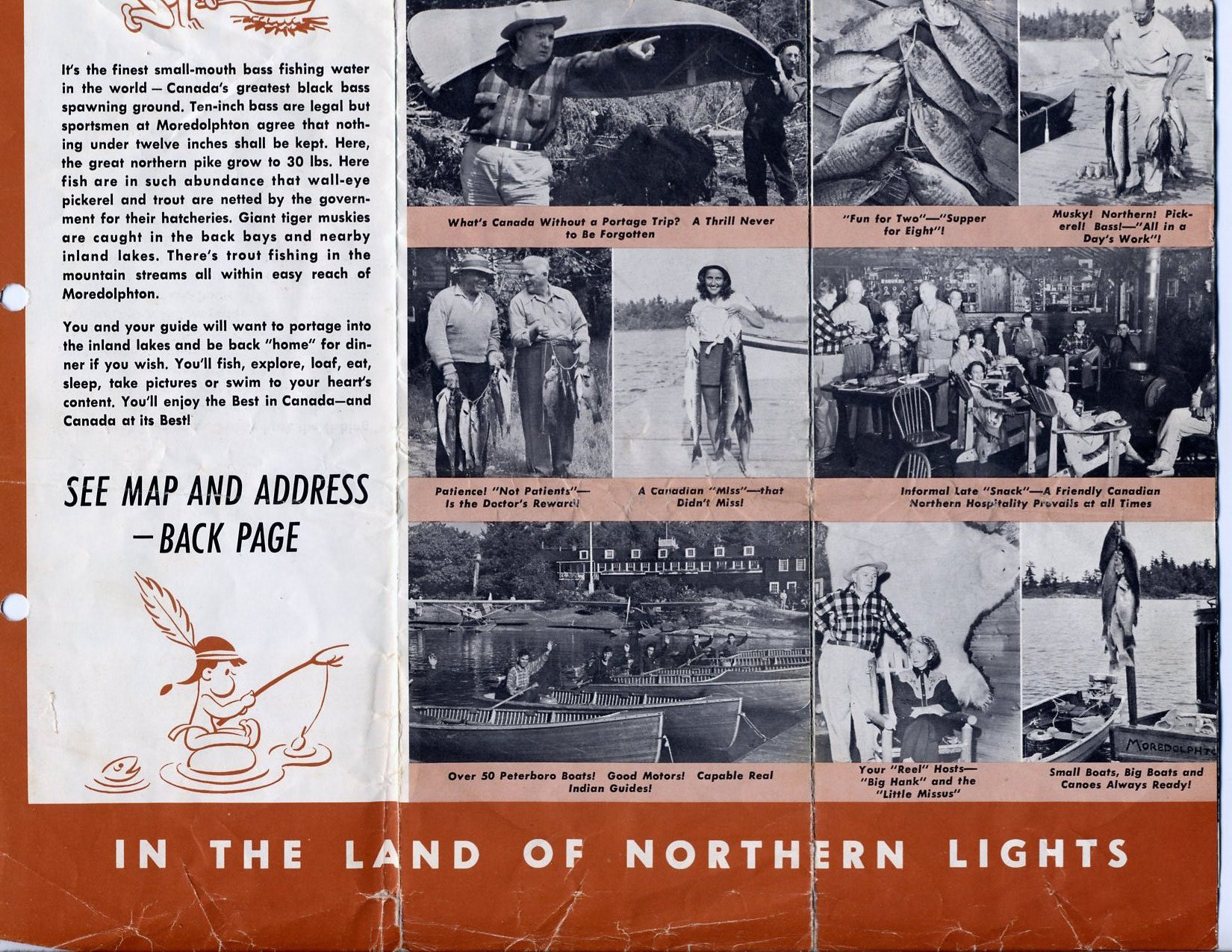 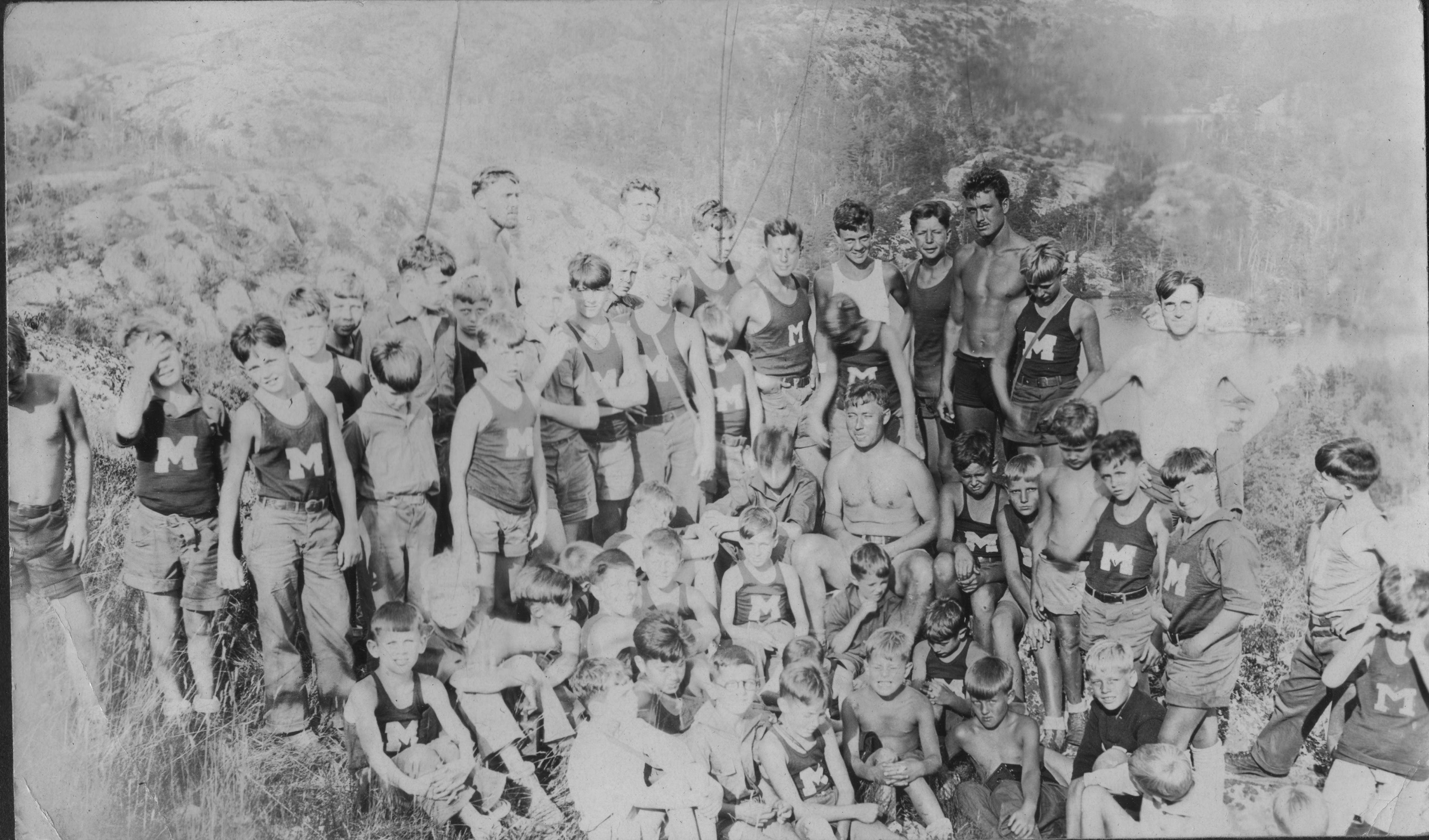 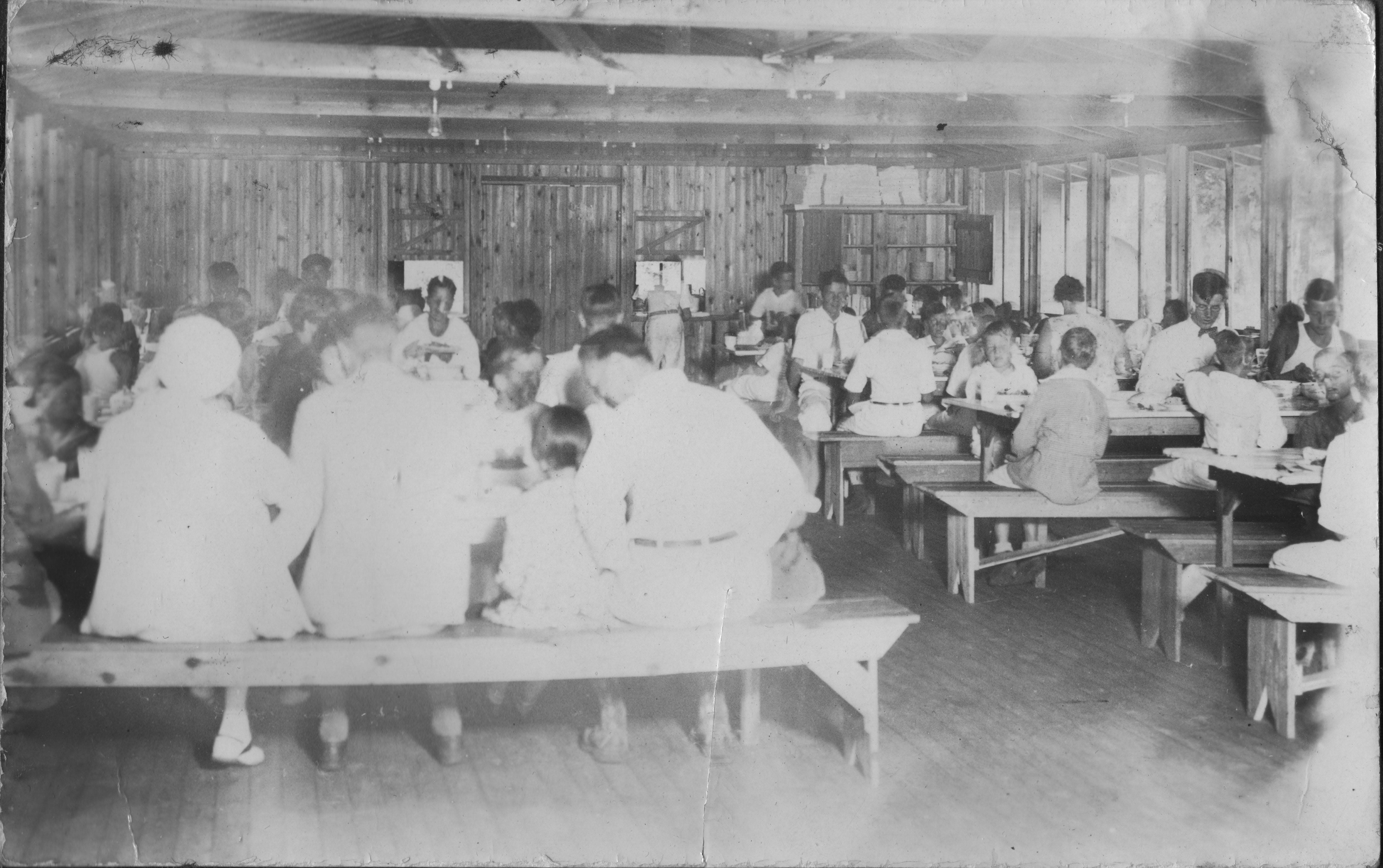 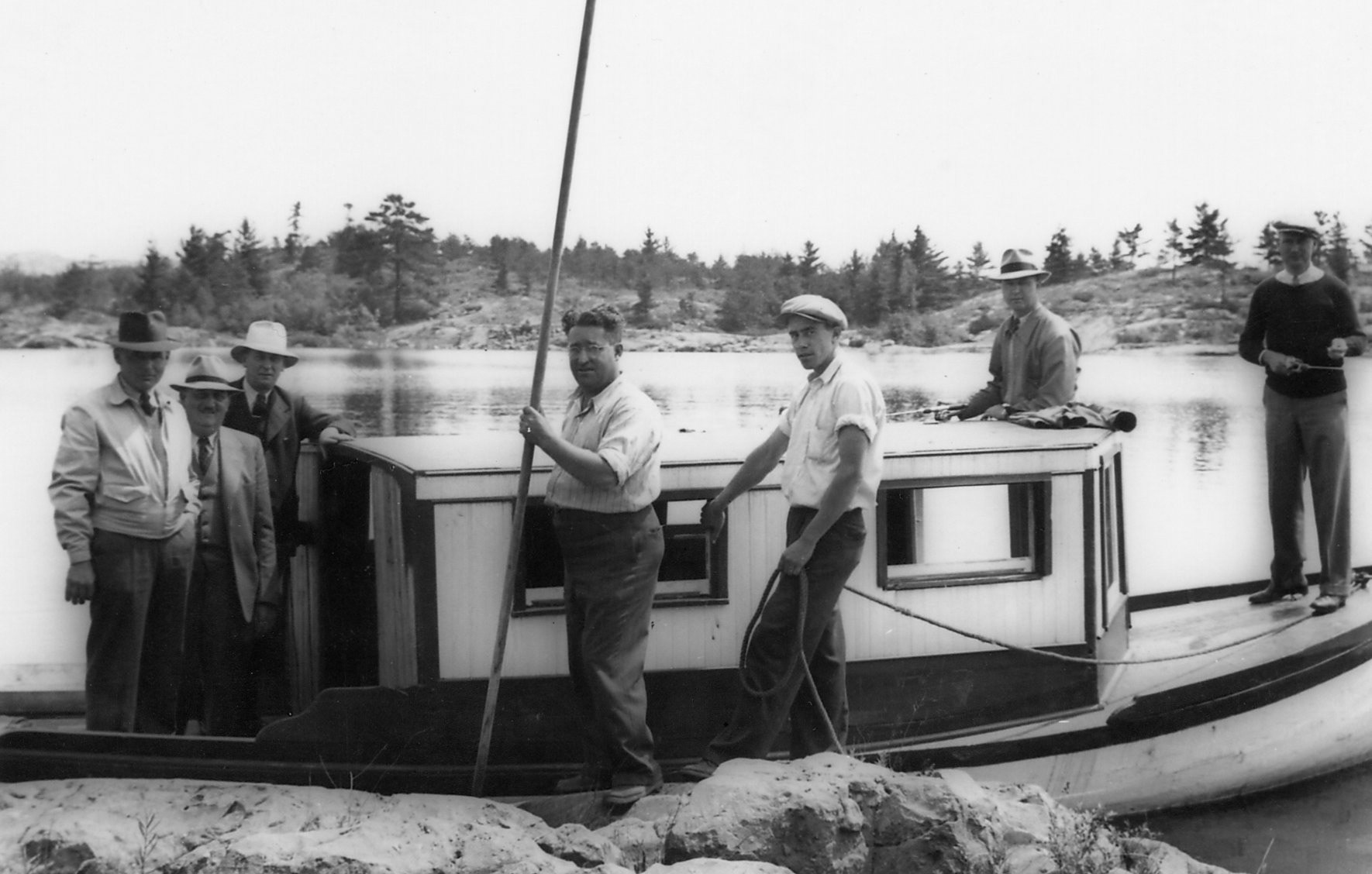 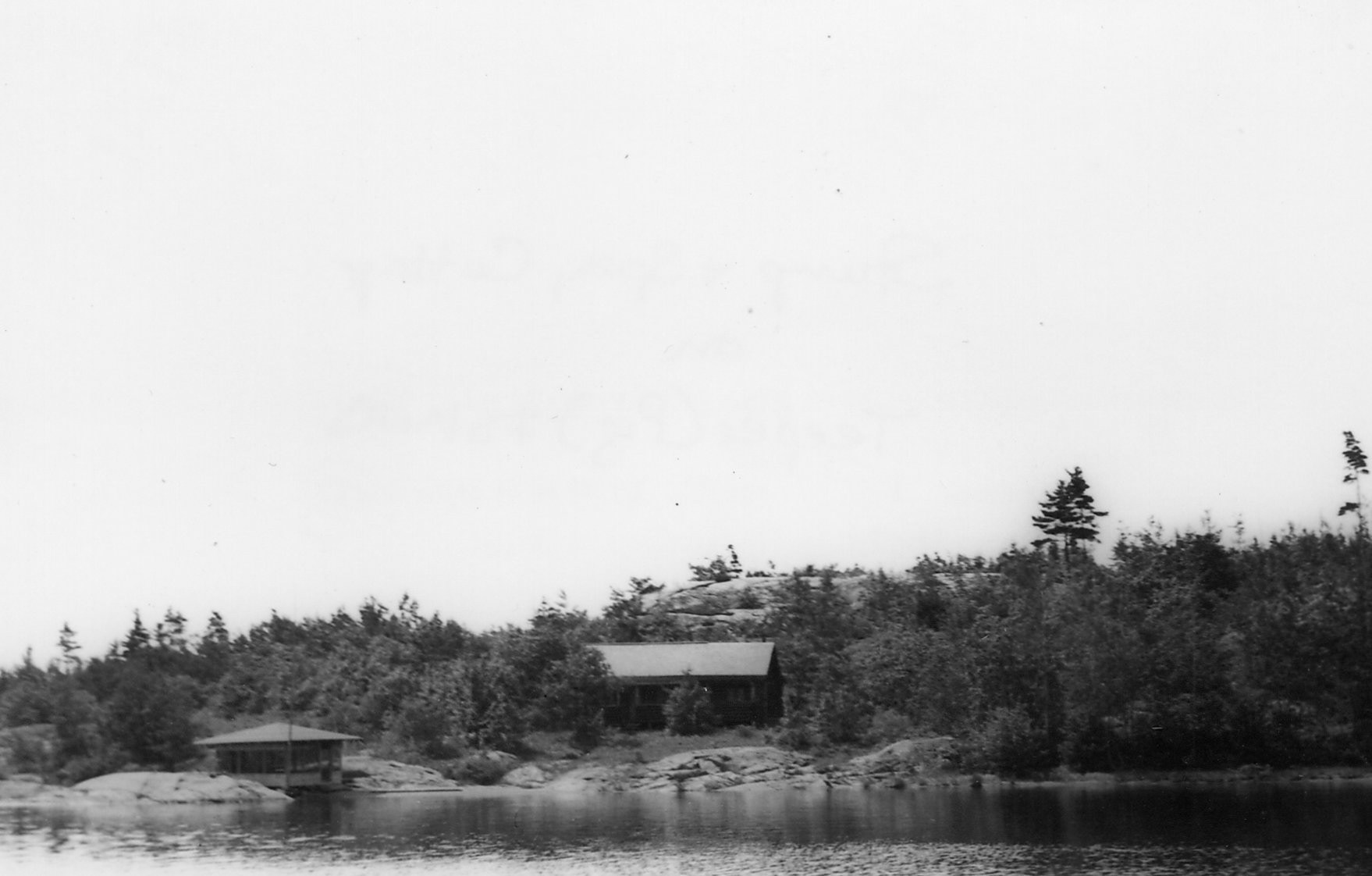 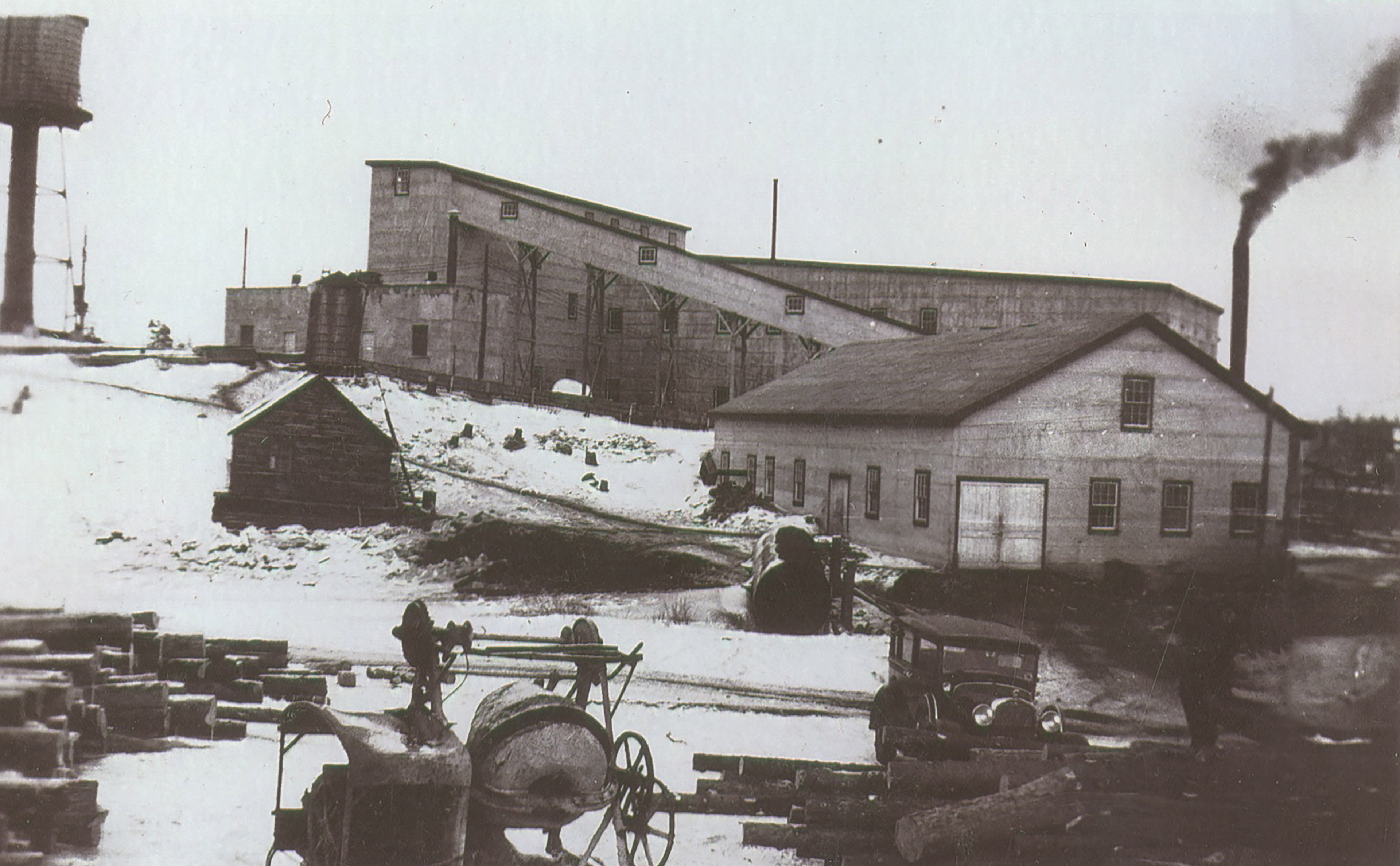 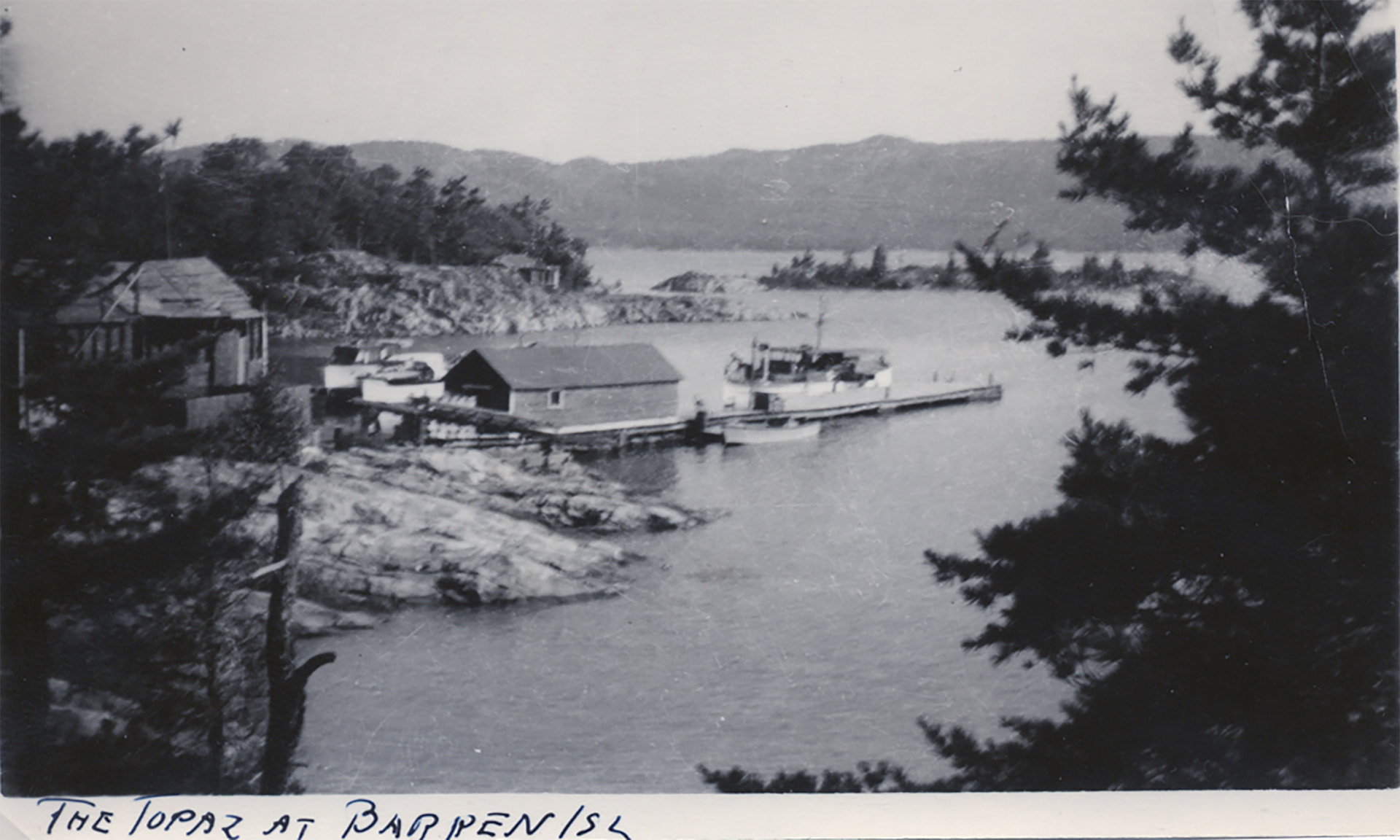 The yacht Topaz at Barren Island during prohibition in the USA...Barren Island was fondly called 'Barrel Island' 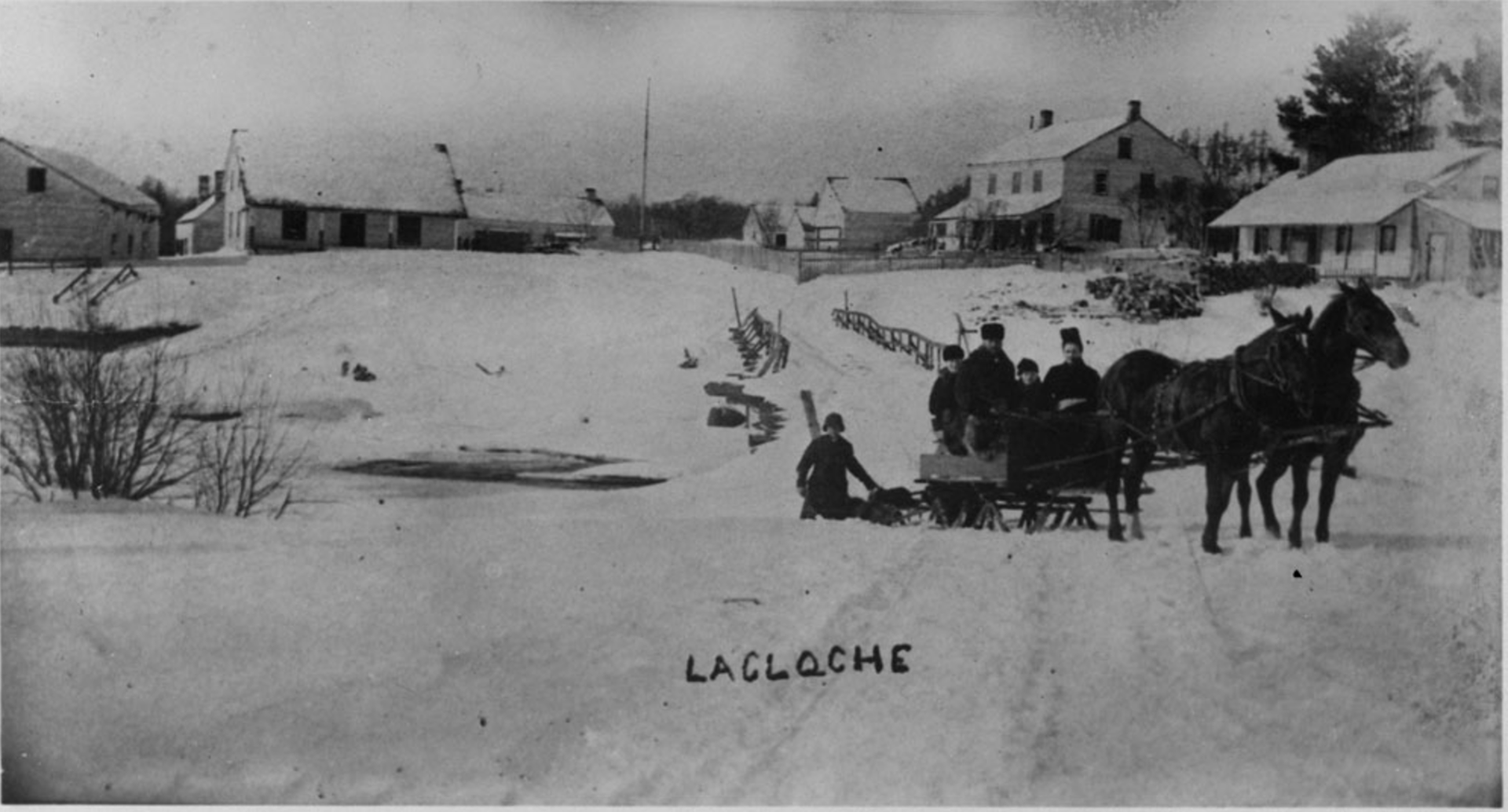 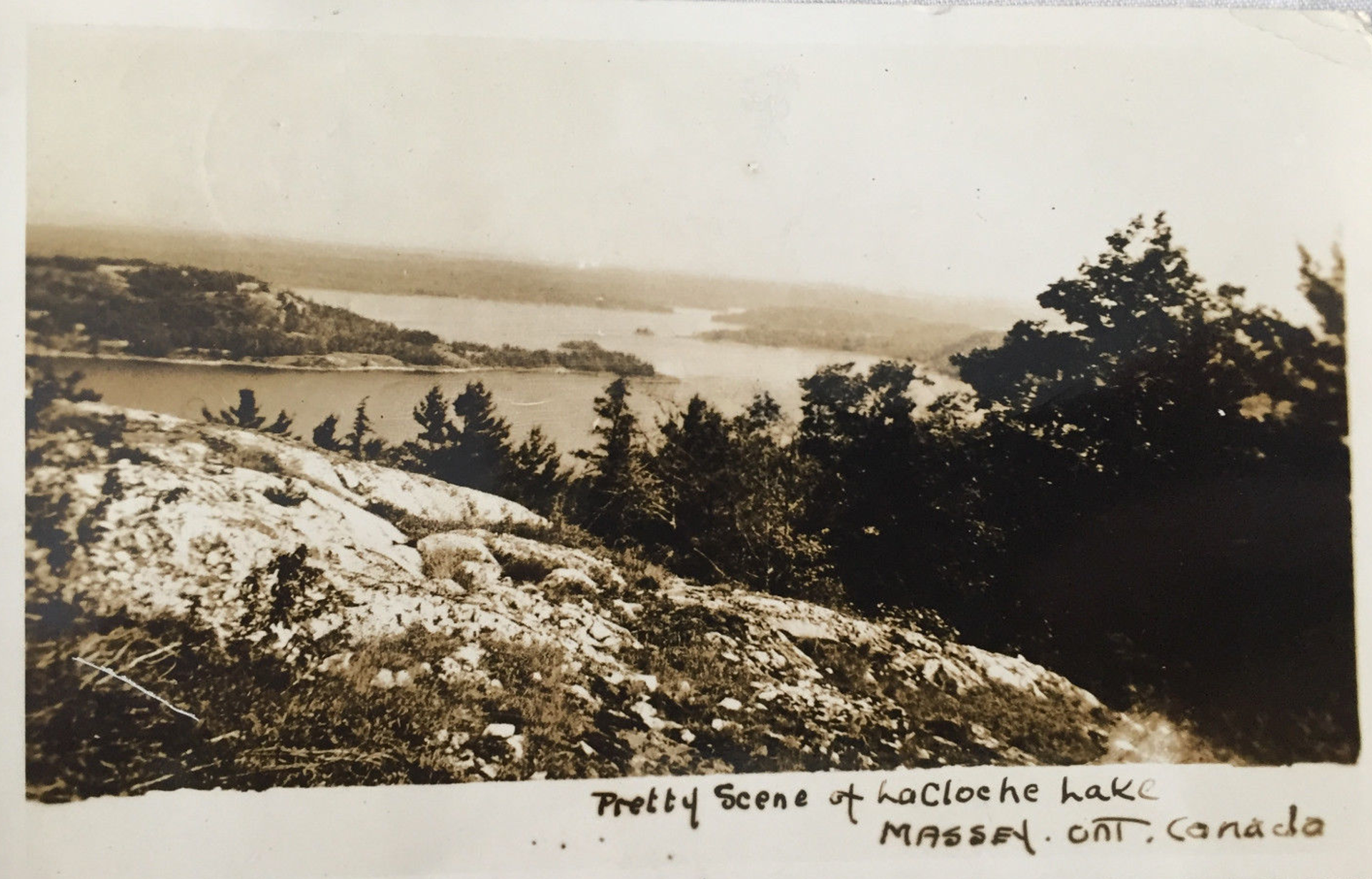 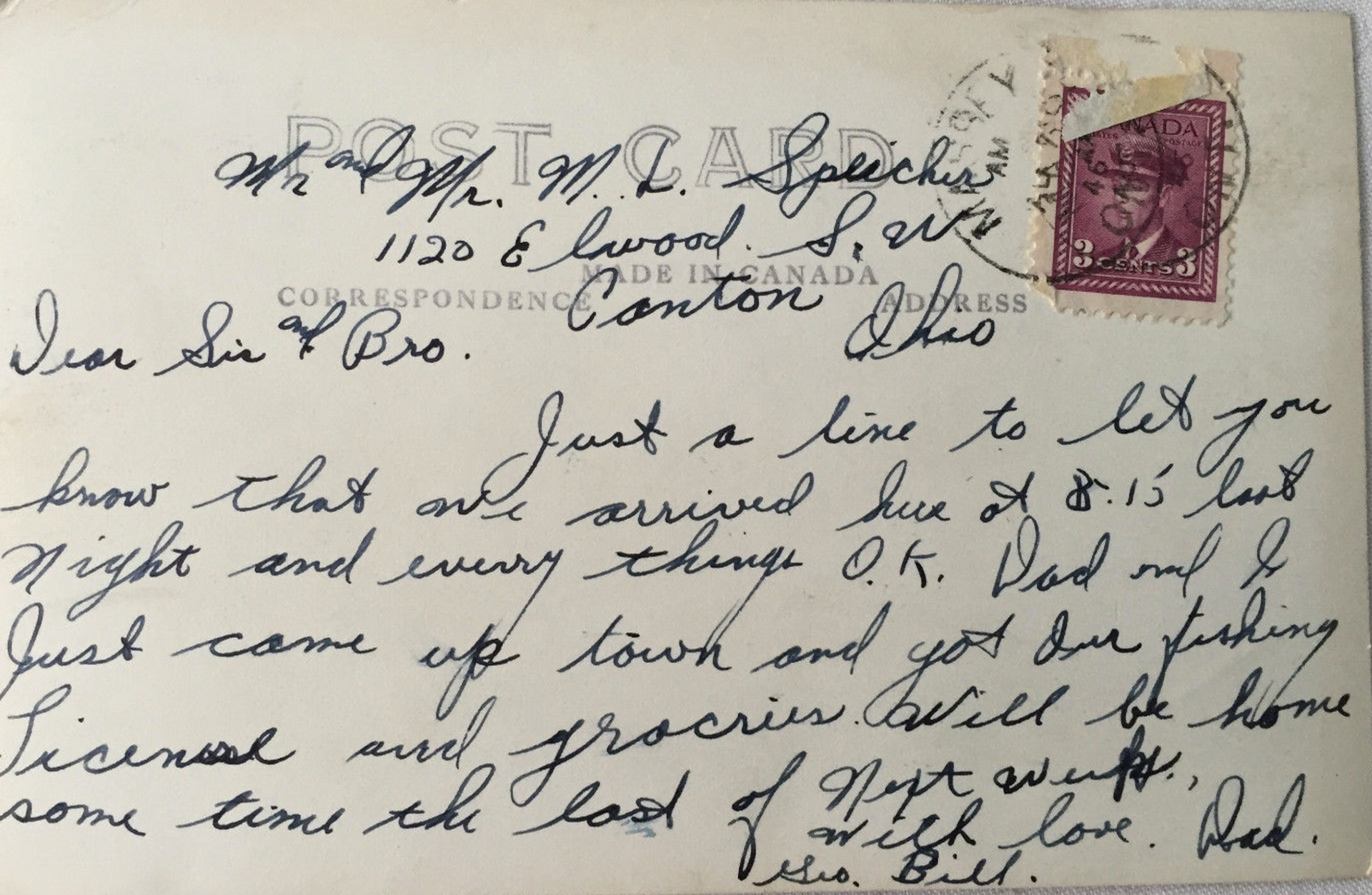 Resorts in Ontario from a 1932 CPR promotional booklet.

Resorts in Ontario from a 1932 CPR promotional booklet.

Catching the Jewelry Thief
A True Tale of Fort La Cloche
by H. J. Moberly
Published in The Beaver, March 1923
Reprinted with permission from Canada’s National History Society
Publisher of The Beaver Magazine
In the summer of 1853 the staff of Fort La Cloche consisted of the chief factor, clerk, and an old, trustworthy Orkney man.
The store was some sixty by thirty two feet. Downstairs it was divided into two rooms; one end was the trading shop with stairs leading to the upper rooms, the other was for furs and had a similar stairs for going up. Each end had a door to enter by. The upper room ran from end to end and was used as the reserve place for keeping the goods for trading, and was seldom entered except when a band of Indians arrived, when the chief factor handed the clerk a new supply.
The chief factor began to miss some cards of rings and earrings, and spoke to the clerk. They were compelled to suspect the old Orkney man, but on account of his long service, instead of accusing him he was sent off to an outpost at the post.
So things went on until the next band of Indians came in, when more jewelry disappeared. Now either the clerk or the factor must be the guilty party. Nothing was said until more Indians arrived. The chief factor, who was watching, saw the clerk take a lantern and the key and enter the shop.
He did the same and got in by the opposite door. Then each one, with a covered lantern, waited to see what would happen. Suddenly something dropped to the ground where the jewelry was kept. At once both lanterns were uncovered and they stood face to face. The chief factor gave a long sermon and told the clerk that he would report him to Sir George Simpson, which meant instant dismissal without a character. As soon as the factor was done, the clerk, knowing well that his word was futile against that of a chief factor, said he would as soon as he got home, publish the truth and show the outside world that one of the honorable chief factors of the Hudson Bay Company was a rogue.
During this time the card of rings that had fallen close to the wall suddenly disappeared. Both ran to the place and saw an open space between the floor and ceiling and heard the card being drawn along. They tore up some of the floor and there found all of the missing jewelry and a lot of other small things. They set a No. 1 trap, and next morning found the thief dead. He turned out to be a large grey squirrel. They decided to bury him, shake hands and wash out all the bitter words that had passed the night before.
Here was a case of circumstantial evidence. Either of the two would have sworn that the other was guilty, and both would have been wrong.
Moral - Never believe solely in circumstantial evidence.